So, I'm not really sure where to start...
Could it be the $16K damage to the house from Ike?  Nah.  It's fixable and hasn't really caused too much grief.  We haven't started renovations yet, but they will come soon enough.
The van?  It was finally totaled, meaning we went from having no payment on a vehicle to now having a new van payment.  Bleh.  However, I do like my new van and am so loving the ride after driving the little bright blue PT Cruiser rental car.  It rides so smooth (the new Odyssey), and the girls love the fact that it has a built-in dvd player.  Rules to soon follow.
Kevin?  He's still in school.  15 hours this semester, which means M-W we don't see much of him.  He's stressed, tired, and overextended.  Having a few health issues too, which I don't need to get into, but I can say we will ALL be happy when he is finished with school in May!
Mallory?  She's doing well in school as usual.  She's the shining star.  We got her report card last week, and her lowest grade was a 97.  Most were 98s and 99s.  Her reading grade level equivalent score is a 5.5.  Not too shabby for a second grader.  Mallory is my sensitive child and has such a caring heart.  She's also such a responsible child.  I worry sometimes that I lean on her too much.
Lila?  She is thriving at her new school.  She is a delight and never misses a day of "getting green" and is so excited about that every day!  She's learning to read & loves to help me in the kitchen.  She's such a good little helper.  If for some reason I don't want her to help me with supper, she does NOT like that at all... and lets me know it.  Lila is my passionate child... whatever feeling she's feeling it's to the extreme.  Whether it be good or bad!
And then there's Clara...
Clara marches to the beat of her own drum and three has been a bit of a challenge for us.  She has such a sweet spirit, but if you cross it, watch out!  She's learning her boundaries right now, and this too shall pass (I hope!!)  We've actually had a lot of health issues with Clara lately.  She recently has had several allergic reactions that have concerned us, which led us to taking her in for allergy testing.  The first blood test came back, and showed she had allergies to cashews, sesame seeds, almonds, peanuts, egg whites, coconut, wheat, and milk!  Talk about restrictive!  Some of the allergies are less severe than others, so our current plan is to limit everything completely for 3 weeks to see how it affects her (she's had excema since she was a baby and we're hoping it will clear up).  Then we may slowly add some of the lesser allergins back in and see how she reacts.  Here's all the "special" stuff we were able to find at Whole Foods. 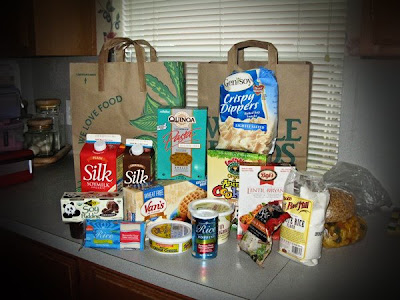 So, after that test, we went to the allergist, who felt like we needed to do the "prick" test to combine it with the other for a most accurate synopsis.  After that, he concluded that yes, her nut allergies were the worst, and confirmed that we needed to keep the epipen with us always.  We added a few more mild allergins to the list, but for the most part the major ones were the same.  He said nut allergies are not usually something you grow out of, so bummer on that one.  He did say that the plan of action we had to cut everything out and then add things back in one at a time was a good one.  So, we'll stick with that and see how it goes.  Here is her poor little back after the test... it looked like she had been attacked by bees, and it was SO hard to keep her from scratching!! 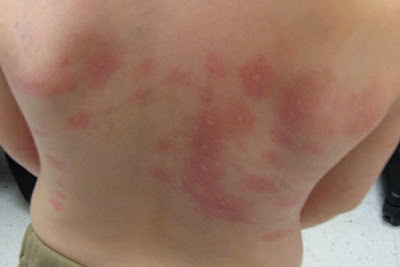 To top it all off, I've had a cold or severe allergies myself for the past 5 days, and it's been CRAZY at the studio.  Let's just say whomever developed the recipe for Claritin-D is my hero.
Kevin and I sometime last month on a much-needed date-night:  (Thanks Paul & April!) 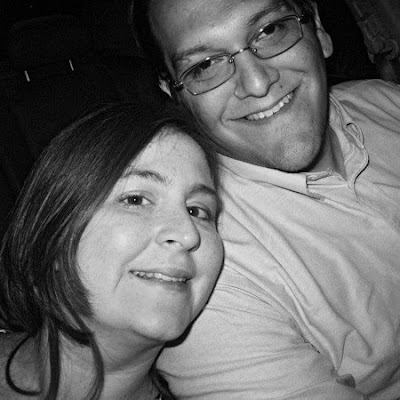 Poor Clara! I need to go to the allergist as my allergies have been much worse this past year but I keep putting it off since I don't want my back to look like that. Poor baby!

You will be so happy when Kevin is done with school. Chris was finishing up his teaching cert when Luke was a few months old and it was a terribly hard time.

((hugs)) and prayers for comfort and relief

Poor Clara, I went through those tests and they stink. Atleast you know what it is that she needs to stay away from. I'm sorry you have been so stressed. This to shall pass. I absolutley LOVE the pumpkin Pics too!! I miss not having you take any of us this year :( Happy Fall Yall :)

Poor Clara! When I get back into her class make sure to let me know what snacks we need to avoid. The wheat thing sounds the hardest. I'll keep you ALL in my prayers.