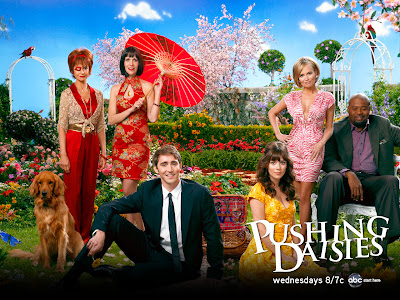 So, I'm not much of a tv watcher. When Kevin is out of town, it rarely comes on with the exception of things like VeggieTales or LeapFrog videos for the kids. He came home one day talking about this odd-sounding show, and we're now hooked. It comes on Wed. nights, so we record it and watch it late at night after the kids have gone to bed. It has quite the odd plot, but is addictive & enchanting in a way because of the narrative storylike quality of the show. Here's an excerpt from a tv.com write up:

"Creator Bryan Fuller (Wonderfalls, Dead Like Me) brought his playful sense of macabre to the show, which ABC calls a "forensic fairytale." Lee Pace (who previously worked with Fuller on Wonderfalls) stars as Ned, a man with the ability to bring the dead back to life with a single touch...but only once. Should he touch the revived again, they die forever. However, if he keeps the revived around for longer than a minute, someone else in proximity dies for good.

A private investigator named Emerson Cod (Chi McBride) discovers Ned's power and decides he would make a good ally: Revive murder victims, ask them who killed them, then collect the reward. All goes swimmingly until Ned revives his childhood crush Charlotte (Anna Friel), and he realizes he can never touch her again"