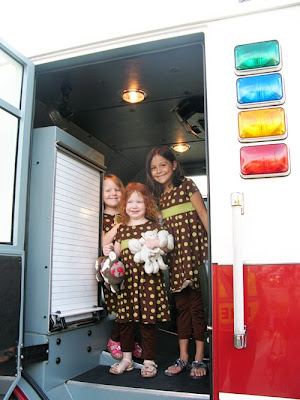 Our evacuation story... (copied from my Facebook profile).
We filled up the gas tanks Wednesday evening. There were already lines and several of the tanks had closed. I stayed up until about 3 am preparing for the storm... getting things off the floor, finishing laundry, dishes, packing, etc. Thursday morning I went by the studio to do the same, and Kevin wrapped up a two hour conference call and we were on the road.
The trip up wasn't bad. When we left we weren't sure where we were going... but we ended up with some friends in a hotel in Plano. We went to visit Kevin's sister and the girls and i played in her pool for about an hour and a half - enough time for me to get a sunburn... we also swang by and saw my cousin and her family and visited with them for a bit. Later we went back to the hotel and watched the storm come in at home via the weather channel. Kevin was on call for work watching their systems and by 4 am the next morning he was working non-stop to get things back up and running. He and a co-worker also in Plano set up camp in the meeting room at the hotel and worked around the clock. I had three stir-crazy girls in a hotel room, so we joined Paul and April for a day at his sister's house nearby and they got to play with new friends and get a little energy out. It was so nice of his sister's family to host us refugees!
Thankfully, Kevin got his work finished without having to relocate to Huntsville, Alabama like we thought he might have to. So by Sunday we had him back. We attempted to go to church, but ended up getting there about 30 minutes late, so we just decided to forgo. Next we went back to the hotel to check out, then we went to lunch and decided to head back home to assess our damage. We had been told we had some shingles down and possible roof damage, so Kevin was anxious to get back and check it out. We headed home, stopping by a WalMart to stock up on some supplies, but while inside got the call that told us our power was back on. So.. we headed home without stocking up quite so much. We decided to go through Waco because it seemed traffic was already backed up going back to Houston.
We stopped in Waco to fill up the gas tank. When we got back on the road, I was turned around getting a video ready for the kids when Kevin apparently missed a stoplight and we broadsided a car going across the intersection. The car we hit flipped and rolled over. Kevin lost control of our van, but regained it and pulled over. We were all okay. The girls were all visibly shaken, as were Kevin and I. After seeing we were okay, Kevin ran out of the car to check on the other vehicle and i called 911. My hands were shaking so badly that I had trouble dialing. It was quite an ordeal and the kids were all scared and Mallory was crying. The people in the other vehicle were both okay as well, and walked out of their vehicle with a couple of minor scrapes. I have a bruise on my shoulder from my seat belt and am a little sore around my neck and back, but the kids and Kevin all say they feel fine. Thank God no one was injured!
The van was undrivable, so the pd's victim service unit came and picked us up. We were afraid we weren't going to be able to find a hotel because we'd heard everyone was booked due to Ike evacuations, but one of the policeman also secured us a hotel room, and the hotel gave us a very good rate. We ran into a couple in the lobby while we were checking in. They had evacuated from Brazoria and we got to chatting. As it turned out, they had two vehicles and plenty of room and offered to give us a ride home. We ended up splitting up and riding home with their family. They were very kind.
The house has some roof and water damage. We'll probably need a new roof, ceilings replaced in about 4-5 rooms and carpet in two. Our new fence is one of the few standing in the area, although it's leaning. The fence we didn't replace is down completely. We do have power, which most of Pearland still does not have, so we feel pretty blessed.
The studio doesn't have power yet that I know of. I do know the windows are in tact, but haven't been back to assess any other possible damage. kevin is actually on his way over there now to check it out. Thanks for all your concerns, well-wishes & prayers. We are truly blessed to have our family well & safe and a home to come home to!
Posted by Laura Odom at 11:21 AM