So, my mom and I have been taking my girls to the same pumpkin patch in Lake Jackson since Mallory was a baby. This will be our 8th year at the same patch. It's become a photo tradition. The past several years, my Grandmother has been able to join us too, which has been such a blessing.
So, it's that time of year! Being a photographer, I have a tendency to be a bit obsessed about what the girls wear for pictures. I still like for my girls to match, and so until they begin to balk fiercely, I intend to keep it up. My days off are typically Sunday & Monday, so Monday is "the" day to do our pumpkin patch outing. I had already seen pumpkins up in Pearland and was really looking forward to our trip. So, last Monday was the day. I still didn't know what my girls were going to wear. After a morning of shopping & hunting down hard-to-find children's clothing stores, I finally found the perfect outfits. I stopped and got some new shoes for the girls as well - because of course, they need to match, and I can't just let them tramp through the pumpkin patch barefoot. (I will be the first to admit that one of the reasons I love my girls to have bare feet in pictures besides their cute little piggies is that it allows me not to worry about what goes on their feet). After a quick trip to the grocery store, I headed home just in time to grab the hair accessories, load the clothes into a cute little bag & then to the van, and then headed to pick up the girls. (3:30 pm - in case anyone was wondering).
We drove to Angleton (a 45 minute drive, give or take), and begin the whirlwind of getting three little girls ready for pictures. Change of clothes, hair, shoes, etc. It's an amusing thing to watch as an outsider, I'm sure. We load up and take off for the pumpkin patch, which is in Lake Jackson, another 30 minutes or so down the road. My dear mother was in the back seat with Mallory, who I believe MAY have come up for air once during the entire drive. We were also playing VeggieTales Jonah on the DVD-player, a technology that awed my grandmother. Of course, we got stuck watching the slowest train in Texas take its time crossing the intersection, but we finally were getting close, and the "Are we there yet?"s could finally be answered with "Almost." It was 5:30.
We drive up to the church where they keep the pumpkins and pull into the parking lot. However, there was a slight problem. Too much green. There were no pumpkins!!! I felt completely bummed. Guess I should have checked to make SURE of the dates for the pumpkin patch. *sigh*
The following Monday, it was pouring, so our trip was foiled again. However, so far, it looks as though there is only a 10% chance of rain for this coming Monday, and I have confirmed that the pumpkin patch is now open for business.
And let me tell you, the girls are ready... the bribes I bought for them to elicit good pictures two weeks ago are wrapped and still sitting in the van!
So, since I have no new pumpkin patch pictures, I decided to share some from years past. I went digital in Nov. 2004, so here are the past 4 years worth of my sweet punkins... 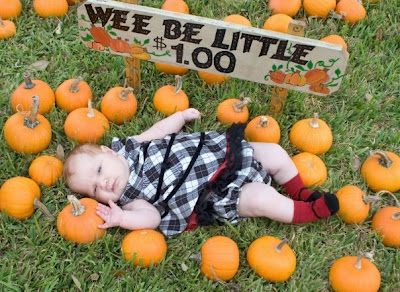 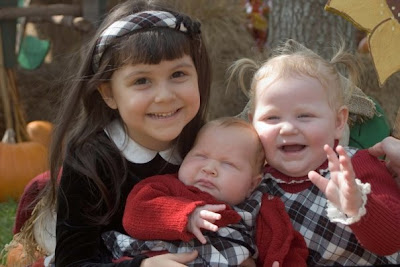 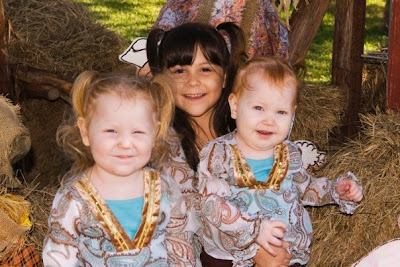 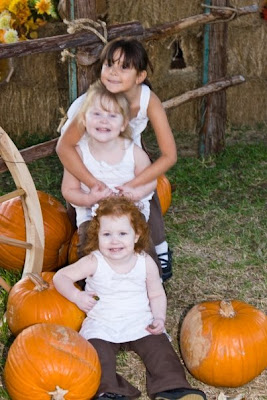 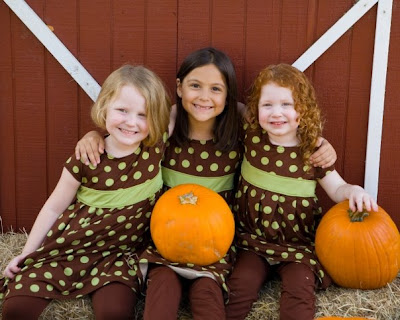