Dropped Mallory off at dance, ran to the grocery store, ran home to unload groceries & put the cold things away, went to pick up the younger two girls.

Fight ensues in the van over who is going to sit in the back. Both girls are screaming at the top of their lungs, launching over one another, and tripping over all the junk in the floor in our van. People are beginning to stare. The mom in the van next to me gives me a polite smile, but behind that smile it was obvious she was thinking "My Children Would Never..." Clara wins the battle but not the fight, as Lila is assured a place in the back on the next trip in the car on the way to church.

We finally get strapped in and buckled and head out to pick up Mallory. About 2 minutes after we're on the road Clara starts whining because she forgot to get her VeggieTale guitar out of her cubby. (Said guitar is all of three inches long). We have a melt down, but I assure her we will get it tomorrow. Meanwhile, Lila has found some scuba gear in the van (don't ask!) and she's pretending that it's a flute and singing a song. Loudly. Apparently, Clara is still in a bad mood over the missing guitar, so she begins yelling "Stop Lila! Stop Lila! I sleep!" Of course, we all KNOW she's not asleep. It doesn't help either. Lila just sings louder.

Fast forward a couple of blocks. We finally make it to the dance studio. After Mallory's class is finished, she comes out without shoes on, so I send her back in to put on some shoes. This becomes Lila & Clara's' chance to escape into the studio. Mallory gets her shoes on while I'm attempting to round them up. Lila has managed to sweet talk Ms. Joyce into giving her a sticker. I tell her to come on. She starts my way, but then Clara realizes what's up and has a meltdown because she needs a sticker too. So I timidly ask Ms. Joyce if Clara can have a sticker too. Of course. By now, Lila is wanting ANOTHER sticker, which I deny permission for, and she gets upset. Getting upset is actually putting it mildly. She throws herself on the ground kicking and screaming and kicks me as I pick her up (with Clara on my other hip to keep her from getting away and running in front of the cars) and screams all the way to the van. We have another fight as we near the van and get in over who is sitting where again. Lila is still upset and irrational over the sticker incident that the seat situation just escalates. Plus, she finds a paper kangaroo in the van that she made two days ago at school that Clara has dismembered, and now she's in tears because Clara "broke her favorite Kangaroo!"

Meanwhile, we get on the road and Clara realizes kitty is in the floor and no one can reach it for her. She cries all 15-20 minutes of the way home.

We get home and other than the disagreement about the color of flowered lollypops each child wanted, it's pretty uneventful for a few minutes while I cook supper. Of course, Clara wants a waffle instead of chicken and we have to cry about that - and hit Mommy, thus a time out. And Mallory and Lila have to fight about where Mommy sits at the table, which of course ends in Lila hitting Mallory and spending some time in time out as well. After everyone is out of time out, we enjoy a relatively peaceful dinner. Of course, Mallory thinks the rice is too spicy.

Kevin calls to say he's running late and will meet me at church. All the while Clara's screaming at my feet and holding onto my leg because she wants a waffle. I tell Kevin to just come get the older two. When he gets home, Clara is throwing a fit because she wants to put her pajama pants on HERSELF. He takes the other two to church and I put Clara to bed. It's quiet for a few minutes... at least until the other half of the family gets home.

Please tell me I'm not the only one whose children act this way.

After the kids were in bed but Lila could be heard talking...

For my "One Year Cancer Free" celebration, we went and had family portraits made. I want to continue with a family tradition I started last January where I take pictures with each of my girls. We went to another photographer, Christie McGrath, whose studio is in Kemah. (http://christiemcgrathphotography.com/) and she did a great job. Of course, Clara was being a bit of a pill. Thank goodness for Photoshop and head swapping!! Here's the end result: 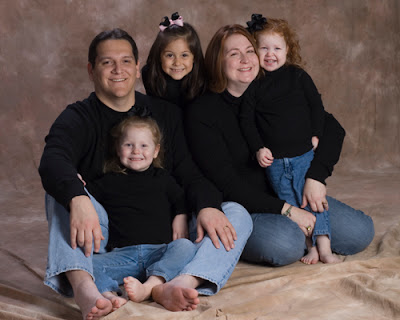 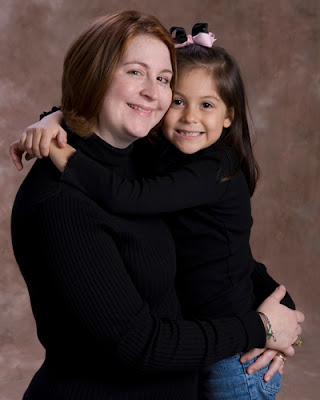 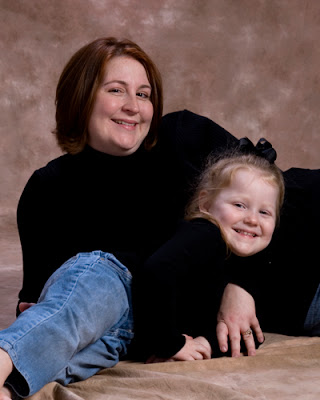 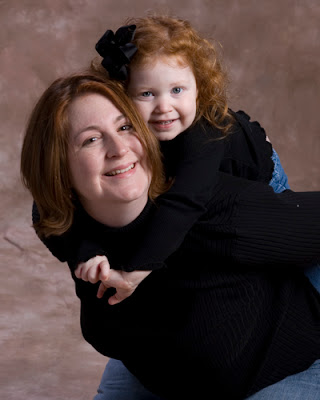 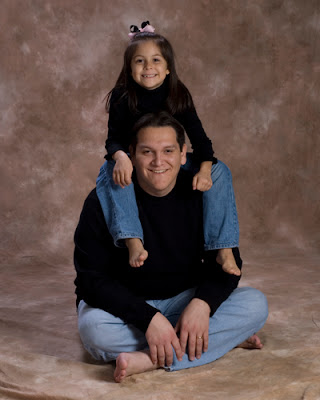 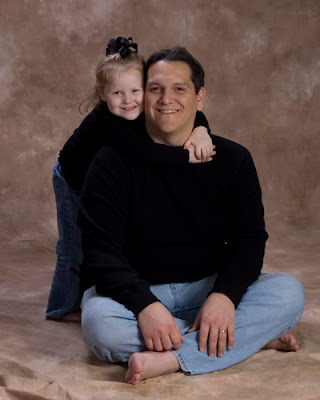 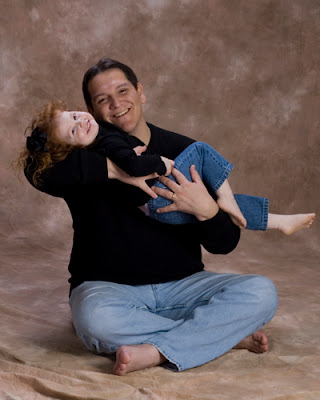 We had a tea party on Saturday as a belated celebration of Mallory's birthday with friends & family... 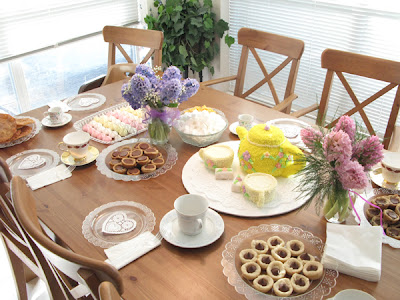 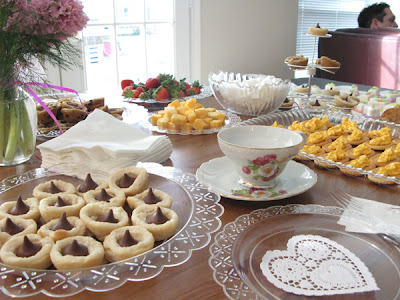 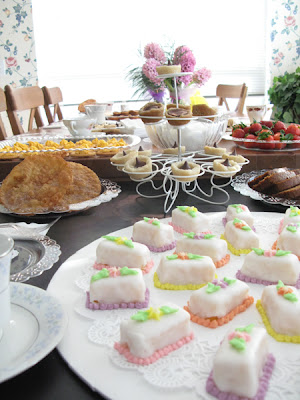 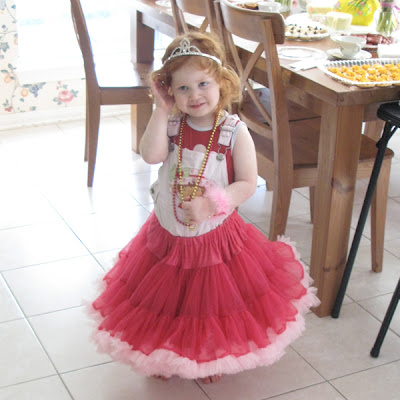 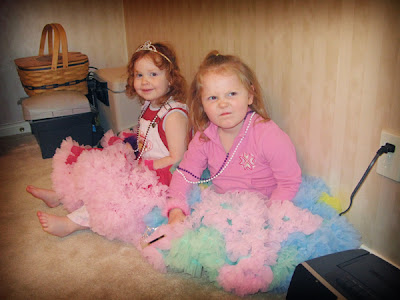 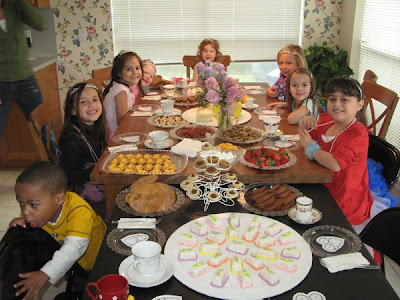 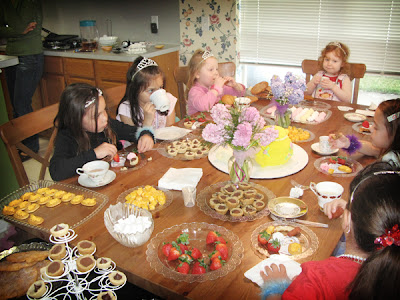 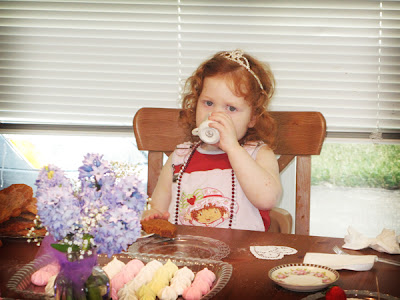 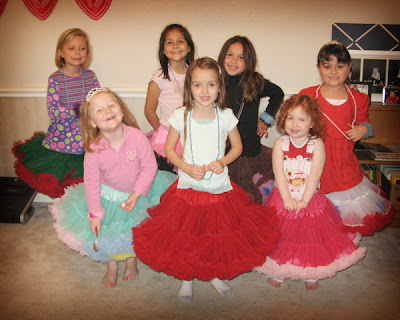 Carmen trying to get Cami to try on her tiara... 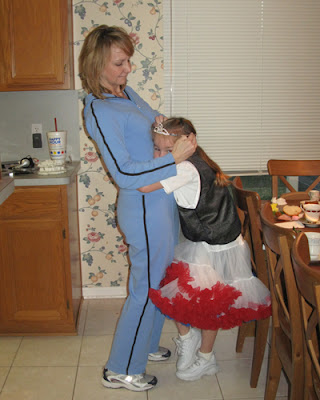 Baby Stephen's mother should be ashamed for putting him in this pettiskirt! 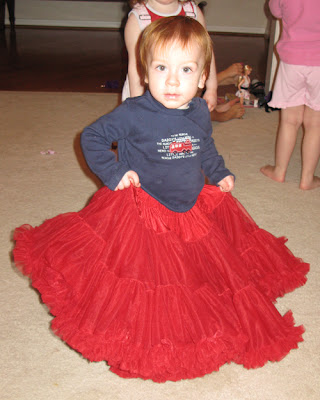 And last but not least, the dance-off:
Posted by Laura Odom at 5:19 PM No comments:

Happy Belated Birthday to my best friend & partner for life... 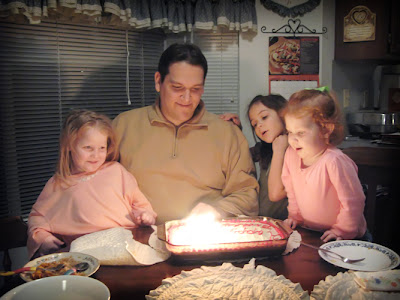 And yes, there are candles under that glow of flames! =)

Posted by Laura Odom at 7:44 PM No comments:

Today is the anniversary of my nephrectomy and the day I became cancer free. In some ways it seems like so long ago - so much has happened since then. In other ways, it seems like yesterday. The memories are still very vivid.
To celebrate, I took the day off. I got a pedicure. 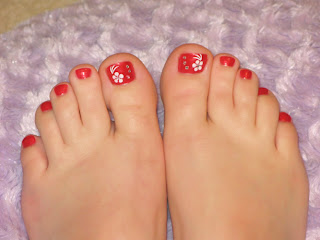 And took a trip to the salon. 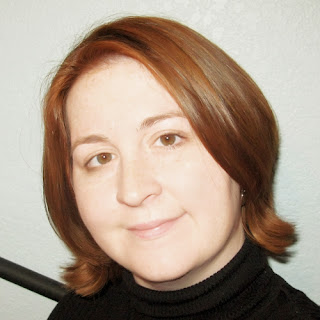 And ran around finishing up last minute things for Mallory's Birthday Tea Party, which is tomorrow.
I then picked the girls up from school early and we got dressed and ready to go have family pictures made. (Yes, with another photographer). Hopefully I'll have pictures to post soon! Clara was a bit of a peel (bib surprise there!) but I think we got some good ones anyway.
We ended the evening with dinner as a family at a hibachi-style restaurant in Kemah. The girls enjoyed it, as did we.
Life is good. Don't take it for granted. =)
Posted by Laura Odom at 7:27 PM No comments:

Things only the mom of a toddler would know...

If you flush plastic cups and cupcakes from the toy kitchen in the playroom down the toilet they will:

A. Actually go down.
B. Will not go ALL the way down, getting stuck inside the commode.
C. Cause a plumber come and fix two toilets, each containing said toys, of course, which will cost approximately $150.
D. cause a 2 year old to light up at the mention of said yellow cup during "a talk" with Mom and say "ME! I do it!!" with a proud grin.

Well, bedtime the past couple weeks has been a little hairy to say the least. Kevin or I one has had to sit in the younger girls' room to make sure Clara stays in bed and goes to sleep - it's been taking as long as an hour most nights before she settles down. And on top of that, she's been coming downstairs in the middle of the night to get in bed with us - which aside from being an annoyance is not safe, in my opinion. She could fall down the stairs or get into something potentially hazardous. So.... we bought a crib tent & this was night one. She was excited about her new bed until she was zipped in and realized she couldn't get out... BUT after 10-15 minutes of screaming, she is ASLEEP. We'll see how the middle of the night goes. I'll keep you posted.

Edit to add the middle of the night update - at 4a.m. on the dot she woke up calling for me. I went upstairs and calmly told her to lay back down. That it was still night-night time and she had to sleep in her bed, not Mommy's bed and that I would come back and get her in the morning. She continued to scream & I went back downstairs. At 4:07 the crying stopped - SILENCE. She was back asleep! Yahoo!

What's in Your Freezer? 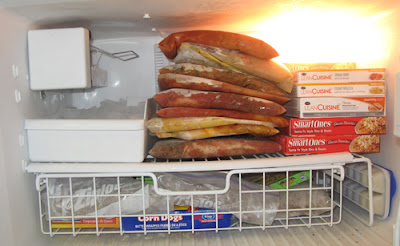 I love it when chicken goes on sale because I like to stock the freezer. Now, I'll admit it. I am a chicken snob. I do not know how to cut a whole chicken & I buy boneless, skinless breasts because there is less work for me involved. My friend Amanda (a la Grocery Game Queen extraordinaire) would frown, but hey - at least I buy the meat on sale!

Right now I have TEN ziplocs full of frozen meals along with two bags of pre-cooked ground beef for last minute meals. It's silly how such a little thing can make you feel so accomplished! And yes, I also have several stacks of frozen Lean Cuisine/Weight Watchers meals because I am in my "need to lose weight" phase & I'm planning to eat them for lunch at the studio instead of grabbing food Sonic or *sigh* even the Pear Tree. I'm back to using www.fitday.com daily. Feel free to hold me accountable!