Internet - I could go for two weeks or more without the television and not miss it. (I'm telling the truth - just ask Kevin!) But take away my internet access for an hour and I'm a mess! Aside from the work I do with my photo cart online and email, I also frequent Google Reader, dpchallenge, and Facebook pretty much daily. I know, it's an addiction.

Insects - Something my 7 year old can tell you pretty much all you need to know about because she's quite studied on the topic.

Intelligence - Something we value highly in our household. When we were first dating Kevin told me he wouldn't ever marry anyone who wasn't smarter or at least as smart as he was. I'll take that as a compliment, I suppose. Although he may question his decision now and then!

Ipod - I do not currently own an ipod. Well, I suppose if we're being technically honest we do have a cheap ipod shuffle that we got when we signed the lease on our transitional apartment when we first moved to Pearland - but we don't use it. Lately, Kevin's been putting all our cds into 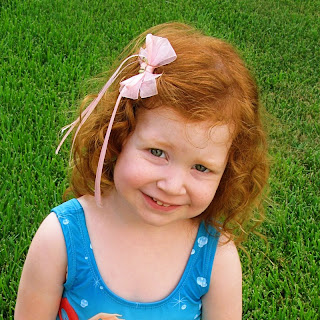 digital format, and I have my eye on the Zune... but I'm not completely sure yet. Comments or input on that?

Incredibly cute and Innocent-looking - Well, I had to get a picture in somehow!
Posted by Laura Odom at 9:08 PM